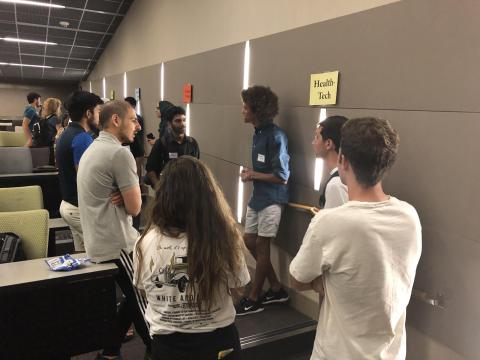 With a new school year at Georgia Tech comes the beginning of one of the Institute’s greatest offerings: the 2020 InVenture Prize, a fierce student invention competition with $35,000 in cash prizes and up to $20,000 for a U.S. patent application for both the first and second place winners, and an automatic acceptance into CREATE-X’s Startup Launch program for the winning team.

The competition is known as one of the most rigorous undergraduate competitions in the nation. Finalists of previous years’ competitions have been featured on ABC’s Shark Tank and have even had their inventions tested by former President Barack Obama.

On Wednesday, Sept. 11, students gathered in the Clough Undergraduate Learning Commons to discuss this year’s competition. It marked the official kickoff to the many sessions dedicated to helping students with prototype building, business modeling, pitch development, patents and copyrights, and mentorship.

Members of the InVenture Prize Organizing Committee, Chris Reaves and Recha Reid, welcomed students and led them through the steps involved in the competition including the timeline of this year’s InVenture Prize. The competition will again be broadcast on live television via Georgia Public Broadcasting as well as streamed online. The classroom setting provided a low-pressure information session for those both familiar with and new to the InVenture Prize.

Team members from last year’s first and second place winners, Ethos Medical and TremorTrainer, also addressed the gathering. They shared what their lives looked like leading up to and after the InVenture Prize, how their ideas came about, and how they balanced the InVenture Prize on top of the rigor of studying at Georgia Tech. “It’s a lot of work, but so incredibly worth it,” said TremorTrainer team member Colten Spivey.

Students also received advice from past participants on how to start formulating their ideas and business concepts for this year’s competition. Attendees then broke into small groups to discuss ideas based on invention categories such as health technology, entertainment, consumer products, communication, and fintech.

Registration for the 2020 InVenture Prize began Oct. 1 and will remain open until Jan. 13, 2020. For a schedule of events leading up to the competition’s preliminary round in mid-January, visit the InVenture Prize website. The preliminary and semifinal rounds will take place Jan. 22 and Feb. 4, respectively, with the much-anticipated finals scheduled for March 11, 2020, in the Ferst Center for the Arts.

In the meantime, students can sign up to be paired with an Innovation Coach for one-on-one guidance by going to IdeaBuzz. Students who are looking to join a preexisting team or form a team are encouraged to visit Cofounder Buzz. 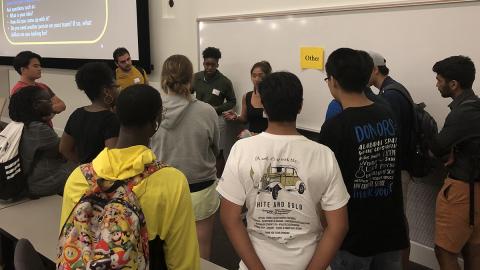